As the Holiday decorations are put back in storage and New Year’s resolutions tenuously stay on track before their inevitable demise; we here at The Mad Banker turn our eyes towards what the year ahead holds in regards to actions from our friends at the Fed, their overall Monetary Policy, and the Interest Rates and what they will “yield” for the economy (I’m a new father so I am going to exercise my God-given right to Dad jokes).

In order to see where we are headed it is important to know where we currently stand. We are less than one month removed from the Fed’s most recent 25 BPS rate increase. The Fed Funds rate now stands at a range between 1.25% and 1.50% and with Monetary Policy that Janet Yellen described as “accommodative” in her final FOMC statement as the Chairperson of the Federal Reserve.

Devoted readers of The Mad Banker will know that this action was foretold in my post from last summer – The Crystal Ball or: How I Learned to Stop Fighting the Fed. While I do believe there is some value in quitting while you’re ahead, I will gladly put my perfect 1.000 batting average on the line and go back for another round of forecasting government policy. 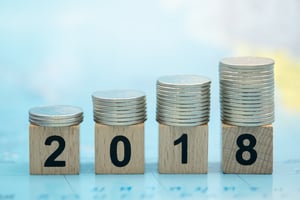 As mentioned in my previous post, all rate increases executed by the FOMC have been announced at those meetings with previously scheduled press conferences. Assuming this trend continues, which I believe it will; this indicates four opportunities for an increase in 2018 – March, June, September and December (source: Board of Governors of the Federal Reserve System).

The year begins with a new Chairperson at the Federal Reserve – Jerome Powell. The Washington Post describes the wealthy Republican as, “a consensus builder who prefers to operate behind the scenes.” Mr. Powell is widely expected to maintain similar policies as his predecessor, so there likely is very little to be concerned with in regards to extremist Monetary Policy or drastic changes in Interest Rates under Powell. In looking at the pace of rate increases under Yellen, it wasn’t until December 2015, or over half a decade after the end of the Great Recession, when rates began to increase. Furthermore, 2017 was the first year with more than one increase (source: Board of Governors of the Federal Reserve System). Therefore, to expect more increases in 2018 than seen in 2017, i.e. four bumps, would be a stretch.

Additional clues can be found in some key metrics that drive the Federal Reserve’s dual mandate of promoting full employment while controlling the rate of inflation. A recent study released by National Federation of Independent Businesses cite some interesting trends developing in 2018. According to the study, a record number of small businesses, approximately 54%, reported finding few or no qualified workers for their current openings. When viewed alongside the Bureau of Labor Statistics’ recently released report showing 2017 produced 100,000 fewer new jobs than 2016, and an unemployment rate that stands at 4.1%, it is difficult to find evidence against full employment in today’s economy.

There is also more information to be derived from the record disconnect between job openings and qualified candidates to fill these openings, namely that competition between firms to attract and retain employees will lead to bidding wars for their services. As businesses struggle to fill their current vacancies, they will inherently need to minimize the number of openings that they have as a result of willfully departing talent. The same NFIB report shows that 23% of firms are planning to increase employee compensation in 2018. This represents the second highest level on record, dwarfed only by 27% seen nearly thirty years ago in December 1989.

Anemic wage growth has been one of the leading headwinds in the economic recovery, but could 2018 finally portend a change in the wind? If so, persistently lagging inflation that has been continuously cited by the Fed in multiple FOMC press releases, including as recently as December 2017, could finally breach the heralded 2.00% level. As the Trump administration mobilizes more business-friendly tax policies alongside relief for middle-upper class workers, the two-pronged effect of talent retention/attraction and reduction in tax liabilities could be a significant driver of price increases. This ultimately would push monetary policy in a less accommodative direction via rate increases.

In conclusion, I don’t believe it is likely that a new Chairperson that is described as a behind-the-scenes consensus builder would begin their term with anything other than the status quo, so an increase would seem unlikely in March. However, as wages grow and future tax responsibilities purported to be lower come more into clear view, I believe we will see rate increases in June, September and December of this year.