With Rising Rates, could there be a Mortgage Refinance Boom?.

Experts have predicted rising mortgage rates for some time, and it appears the U.S. may finally be entering a prolonged increased rate environment. While post-election mortgage rates rose somewhat sharply to end 2016, the current average 30-year fixed rate mortgage has settled back in at 3.90%. Based on the assumption of steadily increasing rates through the end of 2017 and into 2018, conventional wisdom says this should put the proverbial “nail in the coffin” of the refinance market, as most homeowners already seized the opportunity to lock-in at a lower rate throughout this historic run of low interest rates. However, the combination of inflated home prices, low inventories and rising rates may actually cause a shift back in favor of the refinance market. 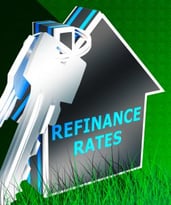 A mixture of rising home values and interest rates is already putting a strain on would-be homebuyers’ ability to purchase a new home, even with interest rates only moderately increasing over the past year. With 30-year fixed rates up just shy of 0.5% and national home values up more than 5%, potential buyers are now faced with a 10% increase in principal and interest payment on a 30-year fixed rate loan over this same time last year. If these trends continue we may see some consumer segments – specifically first time buyers – priced out of the market. While interest rates may eventually level off, it appears rising home values will stick around for a while thanks to some underlying trends which developed during the recent housing crisis.

One issue holding back the housing market from truly breaking through is lack of inventory. With the American homeownership rate steadily decreasing from 68.4% in Q1 2007 to 63.6% in Q1 2017, how can the U.S. still be facing a shortage of available homes? When home values and interest rates began to tumble during the housing crisis, investors (many of whom had never owned investment properties prior) seized the opportunity to purchase deeply discounted homes at historically low interest rates. Countless previously owner-occupied homes became investment rental properties and remain so to this day. Investors were not the only ones who took advantage of the market, as many first-time homebuyers were incented to buy, thanks to depressed values, low interest rates, and a tax credit of up to $8,000. While these first-time buyers are now moving up from their starter homes, a significant percentage have opted to hang onto their first homes as rental properties. Increased rents and a larger pool of renters have made becoming a landlord a more viable option than in the past. Unfortunately, these homes that are being held by investors and newfound landlords are typically more affordable options for potential buyers. This lack of inventory may cause purchase mortgages to level off as interest rates continue to rise, in spite of a healthier economy.

As purchase mortgages level off, it is possible that a shift back in favor of refinances could be in store for financial institutions. Typically, rising rates have not been associated with refinance “booms” in the past, but not much has been typical about the housing market and economy since 2007. Such a prolonged period of stagnant rates seems to have changed consumer behavior.

As rates tick back towards numbers that haven’t been seen in decades, a sense of urgency could start to creep in for consumers who opted for adjustable rate mortgages (ARMs) in recent years. Homeowners holding first mortgage ARMs and even Home Equity Lines of Credit will be put to the test as rates continue to surge. Some folks may already be making a move, as the U.S. mortgage market for the week-ending June 16th saw purchase applications decrease by 3%, while refinance applications surged 9%. While this refinance uptick was triggered by a recent decrease in mortgage rates, it seems that seeing the sharp increase to close 2016 may have been the final nudge some homeowners needed to take action. As mortgage rates climb higher in the future, these refinance “booms” may become a staple of the housing market in a rising interest rate environment.